Hello again, Constant Readers! We Happy Few’s resident Blogslave Keith Hock here, freed from my Blogcage for our second weekend of performances! I have been ungagged and a keyboard placed in front of my fingers and now I can share with you some of those neato secrets that I couldn’t talk about until after the show opened. The fun concept I wanted to look at in this blog is something that is, by now, somewhat of a calling card of a We Happy Few show; our approach to multi-casting. We are no strangers to playing around with our actor tracks to unearth interesting nuance between different characters or highlight a particular aspect of a production, whether that’s the pervasive magic of Prospero’s island in The Tempest or Juliet’s relationship with her nurse and her cousin Tybalt. This play is no different, and I wanted to walk you through some of the thought process behind it.

There are three major communities in this play that we had to account for: the French court, the English court, and Cheapside. For this play, because we were paying such close attention to class dynamics, we thought it would be informative to make the doubling happen along a haves/have-nots axis wherever possible. [We also did this out of necessity; scenes generally take place between members of the same class and when you only have 8 actors and you take your Henry out of contention by having him observe just about every scene in-character you will run out of actors before you run out of roles. But I’m getting ahead of myself. -KH] Take, for instance, doubling Montjoy with Quickly.  First and most importantly, these characters would never, ever, appear in the same scene, so we knew that Riley Bartlebaugh would be free to do both. Second, Montjoy’s role is that of messenger for the French and since the French “desire nothing but odds with England”, her job is principally to carry insults from the Dauphin and Constable to Henry, engendering and encouraging the conflict. By contrast, Mistress Quickly’s (dramatically expanded) role in the English camp is that of peacemaker, keeping the Cheapside boys’ spirits up and their knives away from each other’s throats. Through her doubled eyes we see both a war begun out of pique and boredom and the ravages that same war wreaks on a family that found themselves dragged into it.

Sometimes, as above, we double to examine the differences between two characters. Other times we seek to explore unexpected similarities and create vicious ironies, as by doubling Exeter with the Boy. As before, their paths do not cross in the story so we knew we were free to send Tasha Gallop to do both. In addition, this doubling forces the audience to consider the similarities between Exeter, Henry’s uncle and most trusted advisor, and the Boy, Hal’s onetime Cheapside companion and an unwilling apprentice in blackguardy. Exeter has enough of Henry’s faith to speak for him in both parley and at the negotiation table and it is, if anything, an understatement to describe the Boy as the wisest, maturest, and most competent of the Pranksters. Considering her monologue about the worthlessness of her associates and her desire to extricate herself from their villainy, the Boy seems on the path to straighten up and make something of herself. Until she is killed in a war that Exeter helped to start.

Natasha Gallop as The Boy, from We Happy Few’s 2017 Henry V. Photo by Tori Boutin

Doubling also allow us to tell the story without dumping our actors into minimal roles, and keeps everyone’s business about equal. For example, our concept largely neuters the English nobility with the exception of Exeter, but there still needs to be a court around when Henry wants to say badass things like the St. Crispin’s Day speech. And for as fun and important as Nym and Bardolph are to our play, they just don’t have a ton to do, especially after they get themselves killed. So we doubled Westmoreland and Gloucester with Nym and Bardolph, to give us a chance to see how Hal’s old drinking buddies match up to Henry’s new royal associates. Then, when we saw how much fun Josh Adams and Niusha Nawab were having together, we tacked on the Constable and Dauphin to those tracks as well. For comparison, because Pistol actually makes it through the entire play and gets a nice juicy scene right at the end, there was no need for us to find another supernumerary English lord to give to Wyckham Avery to fill out her business. Pistol and Alice combined to keep her busy enough. 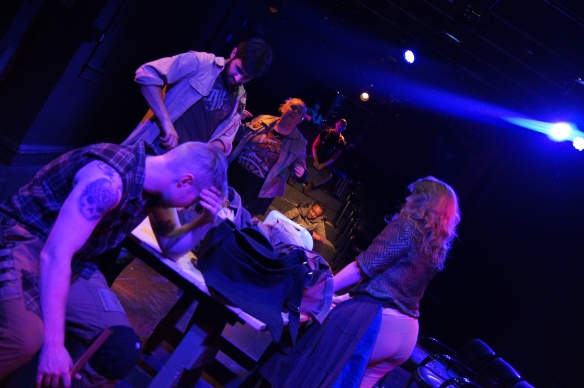 Speaking of Alice, the last pieces of the cast puzzle are the French royalty Katherine and the King, and the middle class Captains Fluellen and Gower. Raven Bonniwell as Katherine finds herself doubled with Captain Fluellen, for several reasons. One, as always, Katherine does not encounter Fluellen in the play. Two, both characters serve predominantly as comic relief, and both do it through their preposterous and overblown voices. Shakespeare wrote Katherine’s scenes in bad French to be funnier, and replaced every ‘b’ that Fluellen would say with a ‘p’ to replicate the silly-sounding Welsh accent. And three, the most serious reason: Fluellen and Katherine have the two closest relationships with Henry. He has cut his ties to Cheapside, callously sending Nym and Bardolph to their deaths, and his court is filled with allies and advisors, not friends. But Fluellen and Henry share an easy camaraderie, bound by their joint Welsh heritage. Katherine, meanwhile, is Henry’s “capital demand” in conquering France and based on his mumble-mouthed wooing seems to have quite enchanted the otherwise eloquent Henry. These two characters do more to humanize Henry than the whole of his “Upon the King” soliloquy.

This leaves Bob Pike having drawn the unenviable task of being the two straight men in the play. France is sober and conscientious. He bases his measured actions on advice from his court and his own wisdom while corralling his hot-blooded son the Dauphin. Gower in turn is a no-nonsense professional soldier who, in our story, largely exists to keep the Cheapside boys under control and listen to Fluellen yammer endlessly about whatever she feels like talking about that day. They represent gruff, unyielding, and unsmiling authority, of the sort that Hal used to rebel against in Cheapside and is still fighting in France. 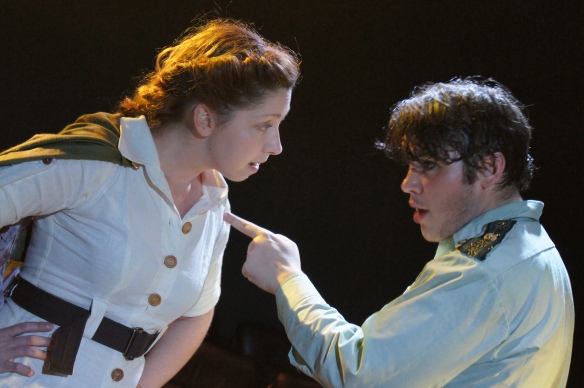 This ended up being a lot longer than I thought I would be able to squeeze out of this topic. I was going to get into how this multiple casting called for us to occasionally play with our quick changes but I suppose that topic will have to wait for another day. If you want to see what I’m talking about, or you want to fact-check what I said here (smart money says I got something wrong), come see the show!