Hey there, folks! Dramaturge Keith Hock here, just checking in on you to see if you’re as excited for We Happy Few’s production of Henry V to open tonight as I am. I doubt you are, not because of any lack on enthusiasm on your part, but because I am SUPER EXCITED about this show. There’s a lot of great stuff going on in this show, which ironically makes it harder to write about. For one thing, some of it is so cool that I don’t want to spoil it before you get a chance to see it. I’ve been sitting on a couple different angles until after we open so I don’t ruin some of the magic that Kerry and the actors and the designers and the stage manager (really everyone in the company but me) worked so hard on. For another, they have done such a good job of understanding and synthesizing the different concepts and aspects of this show together that it becomes impossible to talk about any one aspect without bringing up at least two more. But there IS one thing I can talk about that should get you all good and excited without spoiling your appetite for the show itself; the subterfuge inherent to any piece of art, and how theatre, Shakespeare, Henry V, and more particularly OUR Henry V, acknowledges and rejects that subterfuge.

All art is contrivance. It literally comes from the word “artifice”. Michelangelo can wax poetic about how all he did was see the angel in the marble and carve until he had been freed, but the reality is that he worked and worked and worked and worked and worked until he had mastered his medium, and then he projected his will onto a block of marble and turned it from a featureless lump of stone into a piece of art so magnificent as to bring a man to tears. He labored to conceal the work that goes into the creation of a masterpiece, the errors and missteps and practice, in order to make the art itself appear all the more miraculous. We use phrases like “suspension of disbelief” and “disappears into the role” and “transportive” and “verisimilitude” and “cinema verite” to describe the ways we conspire with artists to conceal the effort that goes into crafting a piece of art. It is a common practice in many forms of artistic endeavor to hide the seams and create the illusion that art sprang, fully-formed and perfect, from your genius, like Athena from Zeus’ brow.

Common, but not universal. Live theatre by its very nature precludes the complete concealment of the craft that goes into it. You simply have to look up to see the light grid or closely at the actors to see their mic packs and safety pins. It will also vary from performance to performance, depending on, among other things, the energy of the audience, and from staging to staging, depending on the company and directorial vision. A sculpture or a movie or a book remains the same from its creation to its destruction, but a play is ephemeral and open to reinterpretation. It will never be the same performance twice, and so is noticeably “imperfect” as compared to static forms of art. Because it is impossible to conceal the nature of the illusion, many playwrights and directors address this issue with my favorite device: they lean into it. They acknowledge the illusion and allow it to guide them. Instead of being limited by attempting to hide the seams, they make the seams an integral part of the final design.

Shakespeare in particular was no stranger to exposing the artifice of his plays. His characters routinely use theatrical metaphors and allusions to discuss identity and illusion. It was a favorite device of his to insert another play into his own works, turning his characters into actors and audience and reminding his actual audience that they, too, were watching a play. It shows up in Midsummer and Hamlet but was perhaps pursued the most aggressively in the seldom-performed prologue to The Taming of the Shrew, where con man Christopher Sly is conned in his turn into…being a rich man? Watching a play? (There’s a reason people don’t usually include the Kit Sly framing device). Nonsensicality of the scene notwithstanding, it very aggressively calls out the nature of the theatrical illusion, and all but calls the actors con artists and their audience marks.

But Henry V does it one better, though in a more forgiving manner. The text openly acknowledges its craft in its masterful Prologue. By encouraging his audience to see the stage for what it is, a “wooden O” peopled by a handful of “crookèd figures” who [Oops. Wrong play. -KH]. By entreating the Muse of Fire, the Chorus immediately signals the audience to recall where they are and what they are doing. Though the text of the scene may beg the audience’s forgiveness for not being princes and dukes on a French battlefield, its actual purpose is the opposite. It would be easy for a king to act like a king, but for an actor to create that same grandeur? To bring an audience to tears over an imagined death? Now that takes skill. Calling out the illusion draws attention to the craft with which it is created. 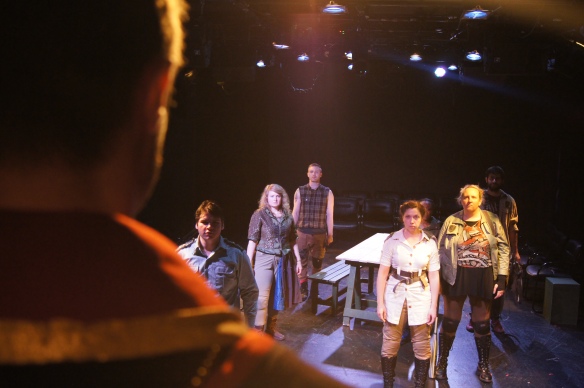 Which, is of, course, where we come in. Shakespeare has issued this challenge to everyone who would stage this play: match my expectations and live up to the Chorus’ promise to the audience. I certainly believe that we have done so, but it is not my place to judge my own company’s skill. It’s yours. We open tonight, why don’t you come see if we accomplished our goal?