Hi there everybody! It’s time for my first blog post of the season, and you know what that means: we’ve started rehearsals for an upcoming show! We will be opening this season in early November with Lovers’ Vows, by 18th-century novelist and playwright Elizabeth Inchbald, based upon the German playwright August von Kotzebue’s Das Kinde der Liebe [literally The Child of Love/Love-Child but occasionally translated as The Natural Son -ed.]

Unless you’re a student of 18th-century German theatre (or, surprisingly, political history), and if you’ve found your way to this blog post you may just be, you’ve almost certainly never heard of Kotzebue. He was a minor but reasonably popular author who was most famous for his murder as a “traitor to the fatherland” at the hands of Karl Ludwig Sand, a pro-German Unification student, during one of Germany’s many unfortunate flirtations with nationalism. I’m not especially interested in talking about him.

Of much greater interest to me is Elizabeth Inchbald, the actress, playwright, novelist, and critic who you’re also unlikely to have heard of. She is MUCH more interesting and I will certainly be digging deeper into her life at another time, but for now what is most relevant as regards her is that she wrote the play Lovers’ Vows, which we are staging this November and which you might have heard of if you worked your way deep enough into Jane Austen’s bibliography to read Mansfield Park, in which this play features prominently. 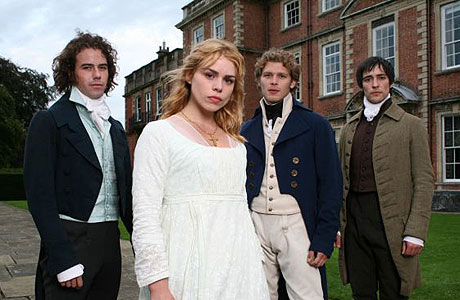 Grateful as we are to Jane Austen for choosing to immortalize this play by its inclusion in Mansfield Park, it is worthwhile to speculate why she would do so. What purpose does it serve in the story and, more importantly, why she specifically chose THIS play, instead of the dozen or so others that Tom Bertram proposes. There is a simple answer that Austen supplies in the text, which also happens to be part of our own reasoning for selection: “They wanted a piece containing very few characters in the whole, but every character first-rate, and three principal women”. But there are some more thematically complex reasons that are worth exploring as well.

THOUGH I WILL DO MY BEST TO OBFUSCATE AND SPEAK IN GENERALITIES THIS BLOG POST WILL INCLUDE SOME SPOILERS FOR BOTH LOVERS’ VOWS AND MANSFIELD PARK. READ ON WITH CAUTION BUT ALSO IT WILL MAKE MORE SENSE IF YOU’RE FAMILIAR WITH AT LEAST ONE OF THEM.

First, a convenient inverse-similarity exists between many of the characters of the two stories, most noticeably the confident and forward Amelia and her retiring but righteous tutor Anhalt in the play, and in Mansfield Park the meek protagonist Fanny and her insufferably prudish and sanctimonious cousin/crush Edmund, perhaps the least likeable of Austen’s male love interests [What is it with characters named Edmund? King Lear, Narnia, this, all Edmunds are terrible -KH] {Edmond Dantes, star of our upcoming Count of Monte Cristo, gets a pass because he changes his name ~KH}. There are also comparisons to be made between Agatha and Fanny’s cousin Maria Bertram, both of whom loved not wisely but too well, and between Amelia’s father Baron Wildenhaim, and Fanny’s uncle and guardian Sir Thomas Bertram, who have differing views of their wards’ judgment and their own moral authority. And also a direct 1:1 similarity, with no ironic double meaning or inversion, between Austen’s Henry Crawford and Count Cassel, who both demonstrate feigned sincerity and inherent aristocratic respectability covering their shallow lusts. By happy coincidence almost all of these mirrors happen to align the actors in Mansfield Park with the characters they would have played! The only exception is Sir Thomas, who not only wasn’t going to appear in the show but also shut down the performance when he returned from his business trip to Antigua and ordered every copy of the play in his house burned. These mirrored characters and their in-play actions foreshadow their actors’ fates in the second half of Mansfield Park, a sort of preview of the story for those readers in the know.

[It is not impossible that there exists a reference to Mansfield Park in my personal favorite book, Jonathan Strange and Mr. Norrell, also, as the fate of the fiery Maria Bullworth in JS&MN seems to mirror that of Maria Rushworth nee Bertram eerily closely, with the role of notorious rake Henry Crawford being played expertly by the villainous Henry Lascelles. This has nothing at all to do with Lovers’ Vows and I don’t know what to do with this information, or even know for certain that it is an intentional homage (although those names are very similar to each other), but I noticed it and I cannot now fail to bring it up, because my mind is broken in a Very Particular Way which makes it impossible for me to stop talking or thinking about Jonathan Strange and Mr. Norrell. -KH]

On a broader level, Sir Thomas’ and that tattletale Edmund’s reactions to the allegedly prurient and offensive Lovers’ Vows (which dares to suggest that a woman should be honest and proactive in her desires, and that a man should be held at least as accountable for his actions as a woman) allows Austen to satirize the outrageous moral standards of her time. She contrasts the dangerous moral of the play, which ends with communication, understanding, satisfaction, and love between all parties, with the unsatisfying “happy ending” of Mansfield Park, in which seduction goes unpunished, the outspoken learn their place in meek servitude to their elders and betters, and the obsequious and passive are rewarded for their servility. Clearly a play with such a progressive and subversive message would truly be too dangerous to even see, much less perform, in this sort of society.

Fortunately for us, we now live in a world that, while still very bad, is not quite so upfront about its hatred and fear of transgressive art, nor so successful at restricting it, as the world of Mansfield Park. None of our dads even tried to burn our scripts when they found out what show we were doing. Please join us in November for the show, celebrate our freedom to stage a comparatively unknown but once extremely controversial show and see what all the fuss was about! Tickets are on sale now!