Hi again, loyal viewers! Blogslave, Dramaturge, Box Office Manager, and Pirate/Drinking Enthusiast Keith Hock here [I gotta trim down my titles, this business card is out of control -KH], to wax rhapsodic about our Critically Acclaimed Treasure Island some more, and to encourage you all to join us for our upcoming shows at our new friends Republic Restoratives! I anticipate a long and fruitful relationship with Republic Restoratives, who were not only kind enough to host our next four performances, but were also savvy enough to create and sell liquor, which I, the rest of the company, most of you out there, and most especially (to at last reveal the topic of today’s blog) pirates and sailors of all stripes, have long been a fan of! Come with me on a brief history of alcohol and the high seas.

As I have mentioned before, sailing was hard and dangerous work, but what may have been even more terrible than working your watch would have been the downtime. Being stuck on a 100-foot-long wooden ship for months on end with a couple dozen other people, minimal opportunities for hygiene, and nothing to do must have been both boring and miserable. It is hardly surprising that sailors would turn to the comforting embrace of the bottle, nor that their captains (and, indeed, the Admiralty) would approve and facilitate this pacifying measure, issuing enough daily hooch to get a sailor good and relaxed but not so much that they could become a liability, either that night or the following morning. Their rationing also gave Management a carrot (otherwise in vanishingly short supply in their motivational toolbox) and an additional stick in their dealings with the crew, in the shape of withholding or offering additional rations. In Treasure Island, Jim mentions that “[d]ouble grog was going on the least excuse” as evidence of how spoiled the crew was, suggesting either that Livesey and (the mysteriously vanished in our version) Squire Trelawney took it upon themselves to keep the crew happy or that Captain Smollett’s hard-edged humorlessness was perhaps more bark than bite. 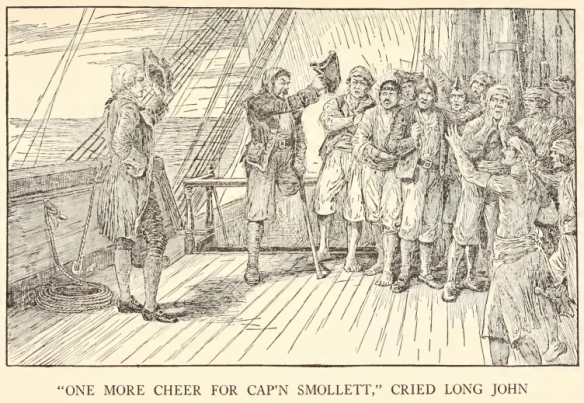 Speaking of grog, let’s get an idea of what sailors were actually drinking. A merchant ship’s complement of alcohol would have varied from ship to ship and voyage to voyage, depending on availability, cost, storage, voyage length, and captain’s/purser’s/owner’s preference. But it would usually consist of either rum, arrack (another distillation of sugarcane, more often to be found in the Indian Ocean than the Caribbean) or brandy for the crew, and wine or more brandy for the officers. [To my dismay, beer would be unlikely, being bulkier and more likely to spoil than more thoroughly distilled spirits -KH] Rum gets all the publicity because of how heavily associated it is with both the Caribbean and of the Royal Navy, though sailors and especially pirates would gladly drink anything they could get their hands on (you’ll recall that unfettered access to the liquor stores was a key inducement to many pirates). Brandy in particular I find to be underrepresented in pirate media; it is Israel Hands’ beverage of choice in our story, and as one of the easier and earlier spirits to manufacture it was a common drink to find shipside. I imagine its modern reputation for fanciness, associations with snifters and Couvoisier and velvet smoking jackets, have impugned the reputation of the hard-working, versatile and ubiquitous brandy. But oh boy did I ever get sidetracked just there, and I was supposed to be discussing grog. Grog is a dilution of the daily rum ration, to keep sailors from getting too drunk on duty and to serve its true function of hydration, and consisted of rum, water, sugar and limes. The seasoned drinkers in my audience may notice that those are the exact same ingredients as in a daiquiri, although I imagine the proportions are somewhat different.

The lime is actually the most interesting ingredient on this list, and it is no accident that they feature prominently in the recipe for so many maritime cocktails like grog, Company Punch, and my personal favorite the Gin and Tonic. In addition to being a magic “make booze taste better” fruit, limes, as a citrus, are crammed with Vitamin C and therefore help fight scurvy, which was otherwise rampant on long voyages. While it was not clear exactly WHY limes and other citrus fruit kept sailors from dying by the dozens on long cruises until the end of the 18th century, it was clear that they did, and so its unintentional inoculation became an established sailing practice. The Gin and Tonic is in some ways a medicinal upgrade from simple grog; in an effort to make the antimalarial quinine in tonic water palatable, some of the more industrious alcoholics in the East India Trading Company mixed it with gin and lime juice (see “magic” above), making it a prophylactic to both malaria and scurvy, as well as the myriad horrors of sobriety. As a direct counter to two different ailments I therefore believe that a G&T is the healthiest beverage in existence and that everyone should drink half a gallon of them a day, instead of water. [My doctor, unfortunately, does not agree with my findings -KH] 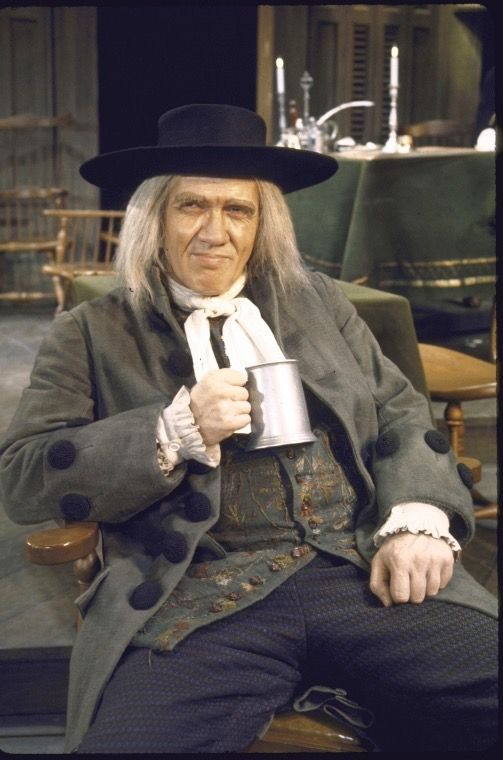 “It’s a medicinal fact that rum gets a man’s heart started in the morning. I’m surprised you didn’t know that.” Roy Poole as Stephen Hopkins, 1776 (1969)

In addition to fighting scurvy, malaria, and its overall comfortable numbing, let us not forget that the most important reason for drinking all this watered-down alcohol on ships all day long is to stay at least sort of hydrated. It has been alarmingly difficult to keep fresh water fresh for the majority of humanity’s existence. There is a reason that society originally coalesced around rivers, lakes, and springs; because that’s where the fresh water is, which we need to drink every day lest our blood turns to jelly in our veins and we dessicate into mummies. But water left standing for any great length of time without refrigeration, circulation, or airtight seals will almost inevitably become fouled with algae, bacteria, insect eggs…whatever you got. Alcohol is very good at killing bacteria and other microorganisms, being basically a fun and delicious poison. So any amount of alcohol in your water made it a little less dangerous, a little less likely to go bad. And the more alcohol there was in the water, the more bacteria it killed. But it also meant the less water there was in your water. Booze will keep the bacteria out of your water but it will not hydrate you. Which is why grog was watered down and why wine-drunk Israel Hands was at such a disadvantage in his fight aboard the Hispaniola.

It is my sincere hope that reading this blog got you all excited about the idea of coming to Republic Restoratives this weekend, seeing Treasure Island, and sampling their wonderful spirits. Tickets are available online HERE or will be sold at the door, and they come with a complementary cocktail devised by director/devisor/mixologist Kerry McGee and prepared by the wonderful staff over at RR. I’d love to see you all there, with a drink in hand.